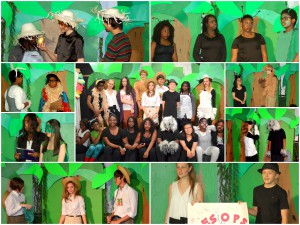 On Wednesday, June 10th, Columbia’s Junior Middle School (JMS) students starred in their own production of Aesop’s Fables as their year-end drama project.

Held in the Ainsliewood Drama room, students held two afternoon shows where they performed a selection of the famous fables for their peers, teachers, and staff.

Students learned the basics of theatre while helping to create the stage set and their costumes. They also taught the audience a few life lessons as they performed fables with meaningful morals such as the Lion and the Mouse which teaches that little friends may become great friends, and the Tortoise and the Hare which advises that slow and steady wins the race.

The audience loved the production and were impressed by the students’ dedication and talent.

Thank you to Miss Forsyth, Miss Aldea, Miss Edge, Miss Oraham and all other teachers and staff who assisted in the production and organization of the play.

Aesop’s Fables
Aesop’s Fables are classic tales that teach important life lessons and morals. They are believed to have been originally written by Aesop, a slave and storyteller that lived in ancient Greece around 560 BCE.