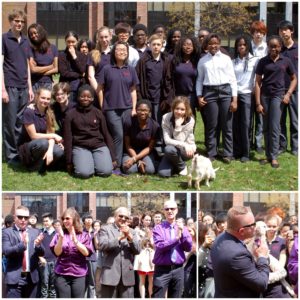 This month, Columbia’s (JMS) students are running a Kiss the Goat fundraiser! This unique initiative will raise money for families in Sierra Leone to buy goats and assist them in becoming self-sustainable communities.

JMS students have nominated 11 staff members to participate in the fundraiser and are asking the school community to vote for the person they would like to kiss the goat. Students and staff can vote by making a monetary donation into jars – each nominated staff member will have their own jar. The person with the most money at the end of the month will kiss a goat in May. Jars are placed in the lobby of both the Ainsliewood and Maple buildings and are donations can be made during the school day.

Adopt a Village
The fundraiser, which runs throughout the month of April, is part of Free the Children’s Adopt a Village campaign whose goal this year is to empower women and families to end their cycle of poverty and create alternative sources of income. Currently, JMS students have raised enough money for 17 goats. With each goat costing $50, they hope to reach their target of 35 goats and are hopeful that the school community will help them in achieve their goal.