By JGOctober 2, 2015No Comments
Book A Campus Tour 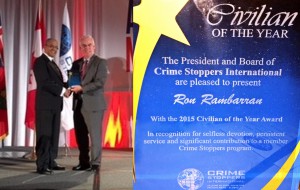 Columbia would like to congratulate Principal, Ron Rambarran, on being awarded the 2015 Civilian of the Year award from Crime Stoppers International.

Mr. Rambarran was presented with this prestigious honour by Crime Stoppers International President, Alexander MacDonald on September 30 at a Conference Gala held at the Toronto Hilton Hotel.

Mr. Rambarran has been a member of the Hamilton Crime Stoppers Board of Directors’ for over 20 years and has greatly contributed to the organization. They stated that “Ron is eminently deserving of this award and we are very proud of his achievements!”