Art in Unison – a celebration of the Arts 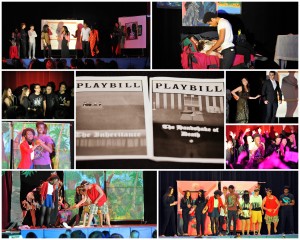 Last week, Columbia held its first ever co-production of the English, Arts and Business Departments. This celebration of the Arts, entitled Art in Unison, was composed of two one act plays and several digital shorts.

Each department equally contributed to the production; Writer’s Craft class wrote the two plays, Drama classes performed the roles, the school band and choir were responsible for the musical performances, the Art classes created the sets and props, and the Marketing class was in charge of all promotional materials. Teachers in each respective department also had a hand in the productions serving as Directors, Producers, Stage Managers and more.

The two one act plays -The Handshake of Death and The Inheritance– were written by Mrs. Pivniceru’s Writer’s Craft and offered a bit of mystery, intrigue, comedy and tragedy. The former was performed by Mrs. Savelli’s Grade 11 Drama Class while the latter by Mrs. Ward’s Grade 12 Drama Class. Intermission was just as entertaining with a number of digital shorts produced by students and outstanding musical performances by the school band.

The Art in Unison Show replaced this year’s traditional Winter Talent Show and given the magnificent performances and work by students, we hope this becomes the new winter tradition!

Thank you to all those involved in the productions including writers, teacher advisors, stage crew and lighting and sound crew.