Columbia among top fundraisers for The Terry Fox Foundation 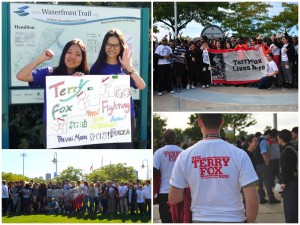 Columbia International College would like to thank and congratulate its students, staff and school community for their contributions and participation during the school’s annual Terry Fox Run.

As a result of the commitment of our school community, we have been named one of the top 50 fundraisers for 2014 in Ontario! We were ranked 7th out of all other participating high schools in the province by raising $23,086.73.

Columbia and the Terry Fox Run
Each year, Columbia students learn about Terry Fox, his journey and the importance of helping others by participating in his Marathon of Hope. Students and staff complete a 7.5km walk from Hamilton’s Pier 4 to the Ainsliewood campus to raise funds for The Terry Fox Foundation and cancer research.

For 35 years Columbia has participated in the Terry Fox Run and is proud to be only 1 of 6 schools in the world to have achieved this.