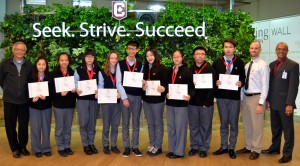 August and September’s ESL awards were handed out yesterday, recognizing the top achievers in each of the five ESL programs. Certificates of Merit and medals of distinction were presented to nine students by ESL Department Head, Mr. Jeremy Galea, Principal, Mr. Ron Rambarran, and Executive Director, Mr. Clement Chan, in a ceremony held at the Living Wall Lounge.

The following students were recognized for their hard work and outstanding accomplishment:

Perseverance
Mr. Galea, Mr. Rambarran, and Mr. Chan, were all equally impressed by the progress each student has made since arriving at Columbia. They understand the difficulties associated with learning a new language and are proud of the students for challenging themselves and persevering through obstacles. All three administrators encouraged students to continue to strive for excellence and they hope receive awards again next month.