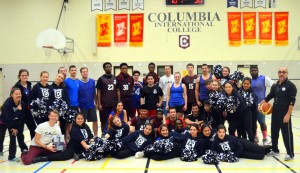 Columbia’s students are used to learning important lessons from their teachers and staff but yesterday, the boys’ varsity basketball team taught them a thing or two about athleticism and humility.

In a friendly, yet highly competitive, basketball game, Columbia’s staff and students faced off in the Ainsliewood gym. With excitement and school spirit at an all-time high, thanks largely to the support of the cheerleading squad, it was clear that this would be an epic battle.

From the tip-off, the boys’ varsity basketball team showed why they are amongst the city’s top high school teams. They dominated the court and secured a huge lead in just the first quarter. Their speed, skill level and high quality plays were problematic for staff who tried their best to narrow the scoring opportunities. While staff did gain some ground in the second half, the boys kept their momentum up and defeated staff 70-38.

Thank you to referees Mr. Freddy and Ms. Lue, and the staff and students who participated in the game.