Jazzing up the CIC Community

By Laura CastilloJune 17, 2019No Comments
Book A Campus Tour

One of the main focuses of music education is to encourage students to build relationships by providing them experiences to share with others.  As a music teacher, James Lawlis understands this concept as he’s been teaching his students self-discipline, dedication, teamwork and self-confidence for 16 years.

James Lawlis’ musical journey began in London, Ontario where he lived there for the first 20 years of his life.  Before he was a teacher, he played in various bands and played a variety of shows as he toured across US and Canada.  One of James’ favorite memories is playing the saxophone for the first time in high school.  “I remember the teacher giving me a saxophone, and I couldn’t even blow in it, and none of the students could do it either.  But when we did it together, the energy that happened – something clicked in my head,” says James.  “Even though it sounded terrible, I remember the sound and the energy we put out there together.”

“You have to diversify yourself in what you can do with music.”

After eight years of touring he decided to go back to school to do teaching training and got his degree at York University.  James explains, “After touring I realized that I could go down a lot of roads with music.  You have to diversify yourself in what you can do with music.”  After university, James soon found himself at Columbia International College teaching music to all grades including Junior Middle School children.

James has continued to grow as a teacher, remarking that it has all been a learning curve.  He says, “Over time I’ve learned how to be a teacher.  This is something you can’t learn entirely in school.  You have to learn how to become a good teacher.”  One of James’ favorite memories working at CIC is one that involves helping a former student.  James recounts: “I had a former student who initially struggled with learning instruments, but she really had a passion for it.  She put all her effort into learning, and was always in the practice room – practicing and practicing.  At the end of it all she got accepted into a music program at UBC.  She sent me a video of her playing in the orchestra and she’s really good.  That’s the kind of thing that happens at CIC that I like!” 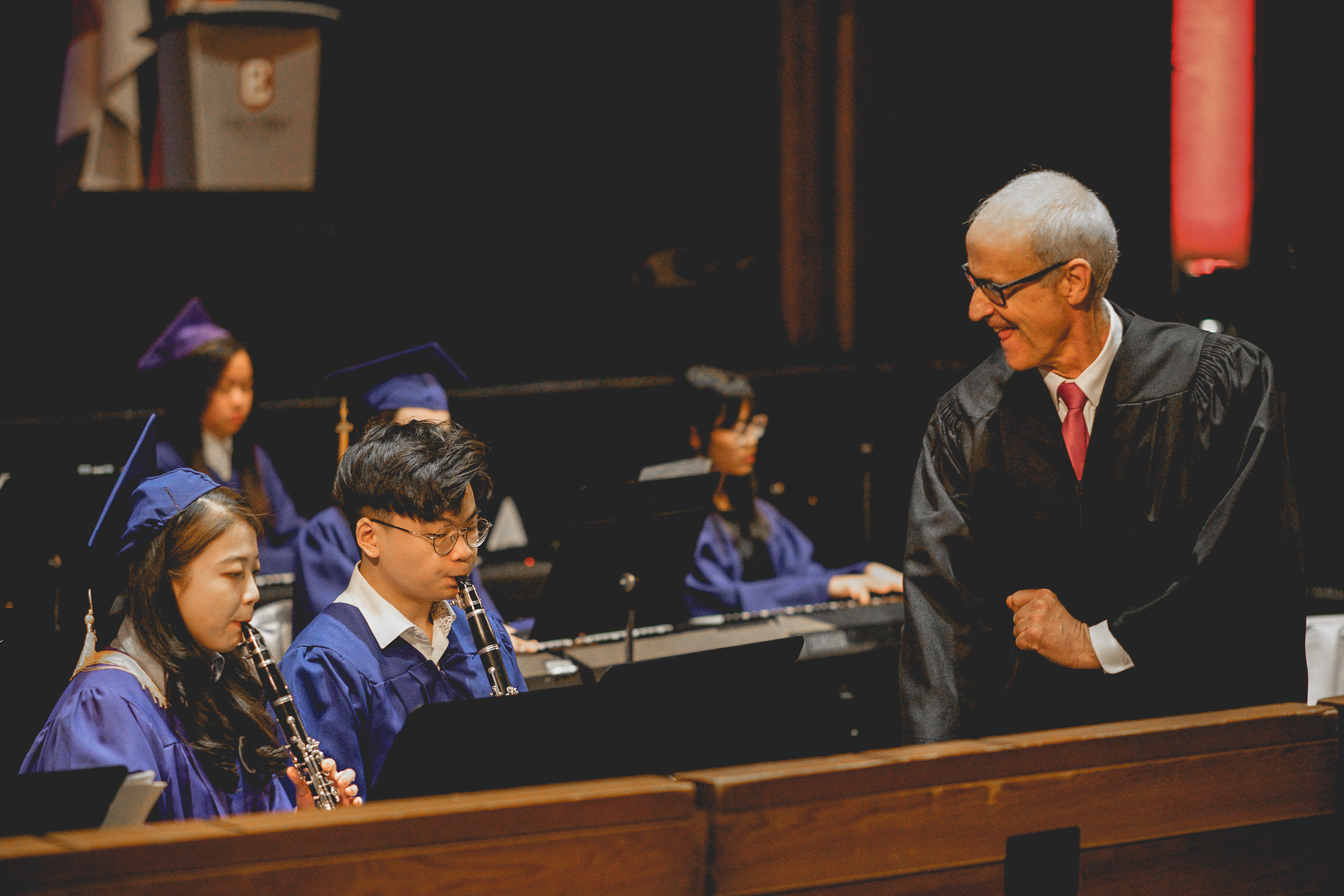 Mr. James Lawlis conducting at the May Graduation 2019

“I think for an international school, it is the right place and the only place that has this quality and this level of caring for students.”

With being a long standing teacher at CIC, James discusses the evolution of the school for the last 16 years, describing how much the school has grown in size and in numbers.  He explains the advancement in multimedia and the talented teachers and staff who continue to dedicate their skills to the students.  “CIC is a family.  It’s a family with that we take in new members.  Students and staff, they become a part of the family, and they stay a part of the family.  We’re always adding on,” says James.  “Over the years I have made great friends here with the staff members, so I’m sincerely honored to be a part of the team here.”

James’ enthusiasm for his work is very noticeable in his classrooms and during school events.  His flair for music and passion for his students is undeniable as he guides his students to reach their full potential.  James explains, “I think for an international school, it is the right place and the only place that has this quality and this level of caring for students.  There’s a lot of other schools around and they just don’t match.  I think that Mr. Chan puts a lot of heart into it.  I think him, at the helm of it all, he puts a lot of heart and he doesn’t give up.  I’m not sure if every CEO of every corporation is thinking and working, and putting in the hours that he does.  I have a lot of respect for him.”